It comes as no surprise that Freaky shares the same director (Christopher Landon) as another horror: Happy Death Day as that film also has a comedy trope, time loops. With many of the classic horror plotlines having been used over and over, its refreshing to see someone trying to mix it up a little and also make these films more appealing to those who do not like a simple gore fest. That is also what drew me to this film. It was not going to be doom and gloom, everyone dies. In a comedy horror, you know people will survive. 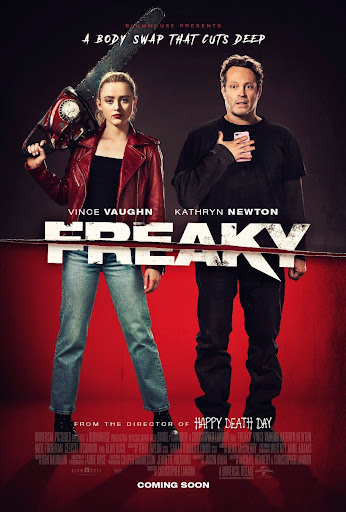 This has never been my favourite genre of film: slasher horror but I made an exception for this one as it stars Kathryn Newton, an actress I love to watch on screen and had the body swap concept which is not a take I have seen on a film featuring a serial killer. The film was like a modern version of the Scream films: set in a small American town, main protagonist is female, killer on the loose, teens at the high school already victims. The comedy aspect from the ‘Freaky Friday’ theme added something different.

I saw the film at a different cinema than my usual and it was very quiet so I got to sit in the centre of the screen with no-one in front of me. The film was easy to get lost in due to the suspense and hopefully none of the cinemagoers sitting at the back saw me jump.

It comes as no surprise that Freaky shares the same director (Christopher Landon) as another horror: Happy Death Day as that film also has a comedy trope, time loops. With many of the classic horror plotlines having been used over and over, its refreshing to see someone trying to mix it up a little and also make these films more appealing to those who do not like a simple gore fest. That is also what drew me to this film. It was not going to be doom and gloom, everyone dies. In a comedy horror, you know people will survive.

You would be mistaken for thinking that the film had no blood or gore at all. The opening scene establishing the serial killer, The Butcher provides plenty of that. There were some new ways of killing teens that I had not seen before such as with an ancient javelin and a wine bottle down the throat. I definitely was hiding behind my fingers for that one.

We then meet Millie (Newton), an average high-schooler who has retreated within herself after her father’s death. She is invisible at school but hangs out with her friends, Nyla (Celeste O’Connor) and Josh (Misha Osherovich). She lives with her mother (Katie Finneran) and older sister, Charlene (Dana Drori) who is a cop. We meet many of the usual high school tropes: the football team, the popular girls, the mean ones. Millie has a role as the team mascot on the cheer squad, a position usually occupied by the ‘loser’ of the film.

When waiting for her mother to pick her up after the homecoming game, Millie is left alone in the dark. Not a good idea with a killer on the prowl. He finds her and in running away she makes it to the football field again. He manages to stab her shoulder with his new weapon, gained in the first scene but before her death, Millie’s sister comes to the rescue.

The next morning, Millie wakes up in the body of the Butcher (Vince Vaughn) and he wakes up as Millie. With help from her friends after they realise the Butcher is actually their friend, the three figure out that they have 24 hours to stab Millie’s body again with the knife, otherwise the swap will be permanent.

Meanwhile, The Butcher as Millie has taken on a whole new look that gets heads turning. It grabs the attention of Millie’s crush, Booker (Uriah Shelton). He also comes to learn of the swap and the pair have a tender moment while Millie is still the Butcher which made for a strange yet funny scene.

The film concludes with a hunt for the killer at the homecoming party held of course, at an abandoned mill where the Butcher resides. There is a second ending where the Butcher comes after Millie and her family but he is finally put to rest.

I enjoyed the teen tropes of the film and that only characters who had wronged Millie or others in some way were victims. The style of the film was great with Millie’s outfit that the Butcher picks being a favourite. There were some gory deaths but they did not take over from the comedy side of the film. The acting was good and just the right tone for this sort of comedy horror. My issues with the film is that there were a couple of jokes made about rape that were in very poor taste and completely unnecessary. That disappointed me as many films and television shows have moved beyond this humour.

Overall, I enjoyed the film and the acting but it was let down by a couple of comments. I give it 4/5.

I recently saw The Post starring Tom Hanks and Meryl Streep so I am going to write my review and talk a bit about the context of the film and what it means in today’s climate in the USA. Also I am going to share my opinions on some of the Oscar nominations.

The Post is set in 1971 and tells the story of the Washington Post trying to print the Pentagon Papers – around 7,000 pages of government secrets about the relations between the United States and Vietnam for over 20 years. The information was kept quiet by the government to protect themselves until Dan Ellsberg, who worked for the Department of Defence, leaked the papers to the New York Times. The paper was told not to print any more of the secret documents unless they wanted to be taken to court by the US government. The Washington Post who wanted to be taken seriously as a national newspaper, found the source and decided to also print the Pentagon Papers. They all have to face decisions between obeying federal law and avoiding jail or fighting for the freedom of information and letting the public know what their government had been doing.

The Vietnam War had many casualties including over 50,000 American soldiers. 100,000 men were sent to fight by President Kennedy. Four US Presidents from Eisenhower to Nixon were involved in the Vietnam War and authorised thousands of troops being sent to fight in a war they knew they could not win.

Apart from Government secrets being kept from the people and freedom of the press, another issue addressed in The Post was sexism. Although Katharine Graham was the publisher of the Post, she still had to prove herself worthy enough of being on the board of the paper. She was the only woman on the Post’s board. For example, at an important meeting for the Post, when she was trying to get investors to back selling stocks for The Washington Post, Ms Graham had prepared her speech and another man next to her took over her speech. She did eventually manage to command the room and the decision to print the Pentagon Papers came down to her and not a man.

Overall I think the Post was a great film and very relevant to today’s US Government and the ideas of ‘fake news’ and the rigging of elections. I give the Post 5/5.

Also in other film news this week is the release of the Oscar nominations for this year’s awards. Many great films, actors, directors and other crew members were nominated.

The biggest award of the night, Best Picture has many great contenders. I have only seen Call Me By Your Name (which I wrote about in November) and The Post but I hope to see a few more before the awards are handed out on March 4th. Personally, I think Call Me By Your Name was one of the best films of the year in terms of storyline, the actors, the setting, the director and the score. It has been nominated for 4 Oscars in total including Best Actor for Timothée Chalamet, Best Adapted Screenplay, James Ivory and Best Original Song – ‘Mystery of Love’ by Sufjan Stevens.

Other great films in the Best Picture category are Darkest Hour, about Winston Churchill and how he helped to win WWII; Dunkirk, about the famous battle of Dunkirk in WWII and the rescuing of over 300,000 troops from France; The Shape of Water which has a staggering 13 nominations and is about a woman connecting with an alien in the 1950s; and Get Out, a horror film about an interracial couple visiting the woman’s white parents for the weekend.

All of these films have received high praise so far, and have done well in other award shows. Darkest Hour directed by Joe Wright has a total of 6 Oscar nominations including Best Actor, Best Cinematography, Best Costume Design, Best Production Design and Best Make Up and Hairstyling. Gary Oldman has already won the Golden Globe and SAG Award for his role as Churchill. This year was the first time he has won any awards.

Get Out has 4 Oscar nominations in total including Best Director and Best Actor for Daniel Kaluuya. Kaluuya has also been nominated for an EE Rising Star BAFTA Award for his breakthrough role.

The other Best Picture nominations are Lady Bird, Phantom Thread and Three Billboards Outside Ebbing, Missouri.

I hope that Timothée Chalamet wins Best Actor, but I predict that Gary Oldman will win as he has already won a Golden Globe and SAG Award for his outstanding portrayal of Winston Churchill.

I would like Margot Robbie or Meryl Streep to win Best Actress for their roles in I, Tonya and The Post. I think any of the nominees, also including Sally Hawkins, Saoirse Ronan and Frances McDormand could win.

For Best Director, I would like to see Greta Gerwig win as she is the only female nominee and her work is outstanding or Jordan Peele, for Get Out, his amazing debut. I feel like Christopher Nolan for Dunkirk or Guillermo Del Toro for The Shape of Water may win the Oscar.

The other awards are still important but I have picked a select few to comment on. If you feel inclined, please leave a comment below with who you want to win at this year’s Oscars.