I know it is Monday but I went home from university this weekend so I was extra busy with my parents so apologies for the late post. I will be doing some different posts soon but for now here is another rendition of what I have been watching this (last) week.

This film charts a story of two men meeting in 1980s Italy, they initially dislike one another but then they migrate to lovers. Sounds simple, which the plot is, yet it is 100% effective. The beautiful scenery of a hot Italian summer, the French language combined with Italian and English, the sensual soundtrack and costumes all come together to create a romantic love story that also explores being gay in the 80s and lusting after someone older then having to lose them. The main character Elio (Timothée Chalamet), a 17 year old who is a gifted musician at first dislikes the loud all American student that comes to stay for the summer, played by Armie Hammer. He gradually realises his feelings for Oliver(Hammer) are not hate but love. Chalamet’s performance is stand out, his emotions are always written all over his body unless he is trying to hide them. He looks French, his parents holiday in Italy but is American. His accent and piano playing are also spot on. Hammer is also great in his role, knowing when to be forward and play hard to get. Also starring are Michael Stuhlbarg (A Serious Man) as Elio’s father, a professor of archaeology who invites Oliver to be his student; Amira Casar (Versailles) as Elio’s mother; Esther Garrel (17 Girls) as Marzia, Elio’s girlfriend who he gradually drifts away from as he becomes closer to Oliver and Victoire Du Bois (From the Land of the Moon) as Chiara, a girl who dances with Oliver and proceeds to lust after him.

A gorgeous film that made me smile and empathise with Elio even though I am not a boy in 1980s Italy. Chalamet made you feel Elio’s jealousy, fear, excitement, sadness, happiness and boredom. He truly brought Elio alive. Overall I give Call Me By Your Name 5/5. 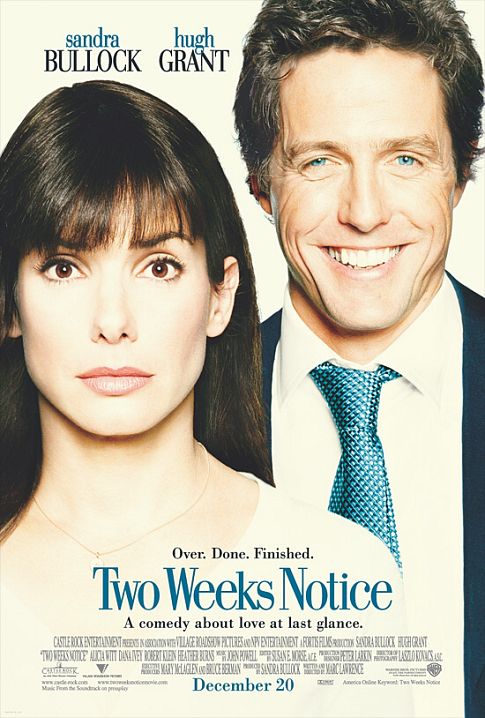 This charming little rom com set in New York City starring Hugh Grant (Four Weddings and a Funeral) and Sandra Bullock (Miss Congeniality) is definitely a feel good movie if you need to be reminded what it is like to love and not be loved back. Sandra Bullock plays Lucy, a lawyer who uses her Harvard education to fight against social injustice. She is offered at random a position as lawyer by George Wade (Grant) who is the face of Wade Corporation, a development company trying to knock down every old building in the Big Apple for their own gain. Lucy, who regularly protests against George’s company accepts the job deciding she can do some good from the inside. She excels at her job and becomes the one George turns to for everything, what outfits to wear to his divorce settlement. Lucy decides he is too demanding and quits for her own health. During her two weeks notice, whilst seeing her replacement, June cosy up to George, Lucy starts to feel one emotion for George she never thought she would: love. She continues to be professional and not let her rare feelings get in the way of quitting. A classic Hugh Grant film in which his character has some shocking similarities to Donald Trump pre 2016 who incidentally turns up for a surprise cameo during a benefit. I liked this film, definitely one to watch if you love Hugh Grant in Love Actually or Sandra Bullock in The Proposal. Also starring are Alicia Witt (88 Minutes) as June Carver, Lucy’s replacement; Dana Ivey (The Adams Family) as Lucy’s tough talking mother; Robert Klein (How to Lose a Guy in 10 Days) as Lucy’s dad; Heather Burns (You’ve Got Mail) as Meryl, Lucy’s friend and David Haig (My Boy Jack) as Howard, George’s business partner and brother. Overall I give this film 4/5.

C.I.A agent Napoleon Solo (Henry Cavill, Superman) and Illya Kuryakin (Armie Hammer, The Lone Ranger) a KGB operative are forced to work together to reach a common goal in the 1960s when the tension between Russia and the US is at a high point. Both agents have no choice but to work for the mysterious organisation. The film starts with an epic car chase through the streets of Berlin, where Solo and Kuryakin fight each other but are then forced to be a team. They meet Gaby (Alicia Vikander) a car mechanic who’s uncle has connections to the Vinciguerra family. Victoria Vinciguerra (Elizabeth Debicki) is building a nuclear bomb and Solo, Kuryakin and Gaby must work together to stop their common enemy from destroying the world as they know it. This film is cheesy and a parody to movies of the time, adapted from a television series of the same name but ultimately a good watch. The blossoming romance between Vikander and Hammer who pose as a couple to be wed gives the film a softer edge. There is also violence but it is more comic and entertaining than gruesome. Hugh Grant also appears as a British agent bringing in reinforcements for the final mission. The dynamic between Cavill and Hammer also gives some classic masculinity that Guy Richie, the director is famous for. Also starring are Luca Calvani (When in Rome) as Alexander Vinciguerra, Victoria’s husband and Sylvester Groth (Inglorious Basterds) as Gaby’s Uncle Rudi. Overall I give The Man From U.N.C.L.E. 4/5.

Hope you enjoy my 3 picks this week, other honourable mentions include Sleeping with Other People (2015) and What to Expect When You’re Expecting (2012).