The use of sound in this film elevates it from your usual gore fest filled with horrific creatures and gruesome deaths. One of the characters is deaf and in the sequel she takes over the role of the patriarch and becomes the one to find a safe haven for her family. We get to experience sound the way she does, when the film shifts to her point of view. It was a great technique that helped the viewer relate to a deaf character when this can be tricky to do if you do not know anyone who is deaf in the real world. 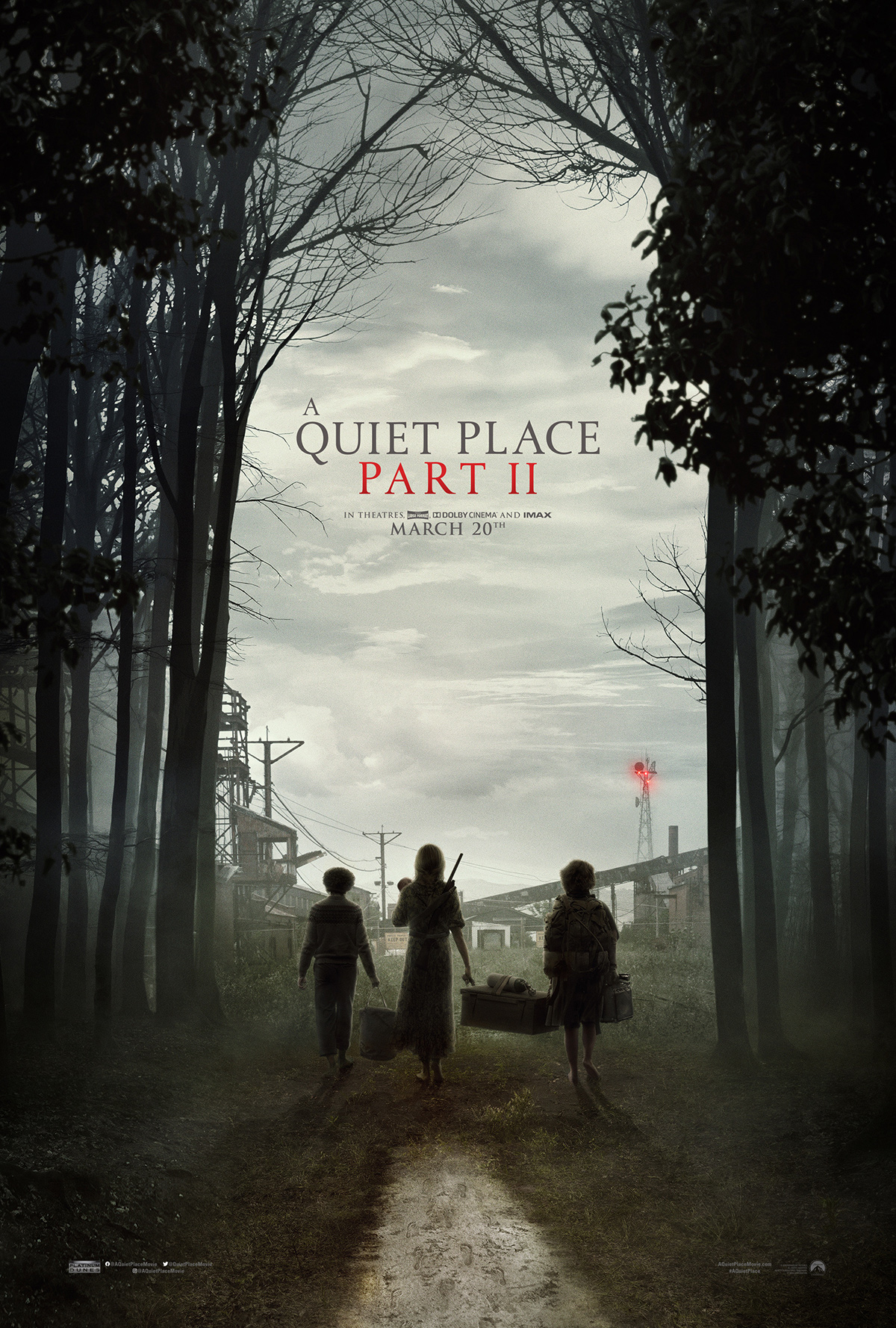 Welcome to my new series Summer of Cinema. The cinemas have reopened and I together with thousands of others have been going to watch the films that we have been waiting for in the last year. I have made the trip twice this month and I am planning to enjoy the experience many times this summer. I will be continuing my series with a review of every film I see in the cinema this summer, of which I hope there will be many. Time to once again sit back, relax and enjoy the magic of the big screen.

I chose this film for my return to the cinema as I was interested in the concept. A 101 Dalmatians prequel of Cruella in 1970s London and in the fashion world. What’s not to love? The film starts with how Cruella ended up in London as a young child in the 60s and jumps to her life as a common thief with her two friends and their dogs. Cruella who is first known as Estella, gets a simple job at Liberty’s and after an avant-garde unprompted window display, she goes to work for the House of Baroness, a notorious fashion house. Estella then decides to become an even bigger presence in the fashion world than the Baroness and to do this she must unleash her bad side – Cruella.

The film was a bold move for Disney as even though the film is a 12, it is pitched towards a younger audience as well. I think the film bridges the divide between a film for younger audiences and older ones. Many people in the screening were adults. This was a fresh take on a villain’s back story and it created a world that had not been associated with Cruella De Vil in other iterations. Whilst we know Cruella as the dog-napping rich old woman with little joy and a grudge against spotty dogs; Estella in this version is fun, kind-hearted and poor. Later in the film when she takes on her Cruella persona, we see some of the Cruella we have known in other films appear. She is a more toned down version than the original and no dogs are harmed in the film.

One of the best parts of the film for me was the fashion. There were so many wonderful and striking designs made by both the Baroness and Cruella. While the Baroness took measured risks and presented as prim and proper; Cruella smashed the expectations and matched rock’n’roll and feminist angst with a runway show. Seeing Cruella’s ideas to outshine the Baroness get even more outrageous and punk was a fun highlight.

Emma Stone was wonderful in the role and her accents were on point both as Estella and the slightly posher Cruella. She played all facets of Cruella seamlessly. I was initially sceptical of Emma Stone’s casting as Glenn Close gave such an iconic performance as Cruella. My fears definitely were vanquished after seeing the iconic performance that Emma gave. It was like she was born to play the role.

I thought that the other actors were all amazing in their roles, especially Emma Thompson as the villain and the children who played the younger versions of Estella and the gang. My only issue with the whole film was that Estella and her friends were around 11/12 years old then it jumps to 10 years later but the actors playing them in the 1970s look at least 30 and not in their early 20s. Emma Stone could just about pull this off but the other two were pushing it. Once I let this go, I enjoyed the story and let go of realism.

The music for was another iconic part of the film with some great classic 70s tracks that paired with Cruella’s bold fashion pieces created a punk rock London scene that I would love to experience.

Overall I give this film 10/10. Every element was on point and my expectations were lowered as it is a Disney film but I feel like the film was suitable for all audiences especially with the period setting and witty dialogue. If ever there was a prequel or continuation of a well-loved classic to live up to or even surpass the original, it would be Cruella. A warm welcome back to the cinema and a great start to a Summer of Cinema.

In contrast to Cruella, I have been waiting for this film since it was announced that there would be a sequel. I do not normally enjoy ‘horror’ films such as these with monsters and jump scares but A Quiet Place bridges the gap between ingenious filmmaking and scaring for scaring’s sake. At the heart of the films is a family that represents everyone. Their struggle to survive in the post-apocalyptic world, especially after the death of a child and the man of the house touches a nerve with many, especially after the past year.

The use of sound in this film elevates it from your usual gore fest filled with horrific creatures and gruesome deaths. One of the characters is deaf and in the sequel she takes over the role of the patriarch and becomes the one to find a safe haven for her family. We get to experience sound the way she does, when the film shifts to her point of view. It was a great technique that helped the viewer relate to a deaf character when this can be tricky to do if you do not know anyone who is deaf in the real world.

I am especially attached to the characters because of the actors. John Krasinski and his wife, Emily Blunt play husband and wife as well as John directing both films. This is rare in the film world and of course their on-screen chemistry is reflected by their real life bond. They already know how to move around the other and as they have children of their own, acting as parents is second nature to them. The actors who play the kids, Noah Jupe and Millicent Simmonds are two of the best young actors in Hollywood today and both do excellent jobs reprising their roles in the sequel and picking up where the first film ended.

While a direct sequel, this film also has a flashback to the first day of the apocalypse and we get to see a glimpse of who the family were before they became survivalists. We get to see John Krasinski and their other son again amongst other members of their small town. The town is actually a replica of the one we see in the first film. I personally did not notice any difference but then again three years have passed in between the two films.

We also have a new character introduced, Emmett who takes over John’s role as the adult male. While Emmett does help the family out when they are being pursued by monsters, it is Millicent’s character who assumes his role as the protector and forward thinker. She becomes the one in charge of saving the family after she hears a clue on the radio and goes to search for an island that she believes will be a new home for her family. In the other storyline, we see Emily Blunt step up to protect her new baby and her son, Marcus who gets badly injured at the start of the film.

The family flee their burning house to find somewhere new to hide when they come across a disused flour mill, or so they think. After being pursued by a creature who we get to see up close for the first time, Marcus gets caught in an animal trap and they seek shelter. By coincidence, the mill is being occupied by Emmett, a friend from before the meteor struck. He offers them shelter and after Regan (Simmonds) leaves to find the island, he goes to get her back and the two form a father-daughter bond.

Marcus then steps up as the man of the mill and looks after his baby sibling while his mum ventures to the nearest pharmacy for medical supplies. What follows are tense encounters with the monsters all set to a backdrop of a genius soundscape that helps the audience immerse themselves in the characters’ world.

There were a few jump scares and seeing the monsters close up wasn’t pleasant but again this film centred around family and human survival. There were twists and unexpected moments that had me holding my breath, not daring to make the slightest noise. Leave your popcorn at home again for this one.

Overall I give this film 9/10. I think some elements could have been expanded slightly and it was missing something that makes a film 10/10 for me but it was a worthy sequel and the acting was on point. Another great venture for John Krasinski and co.