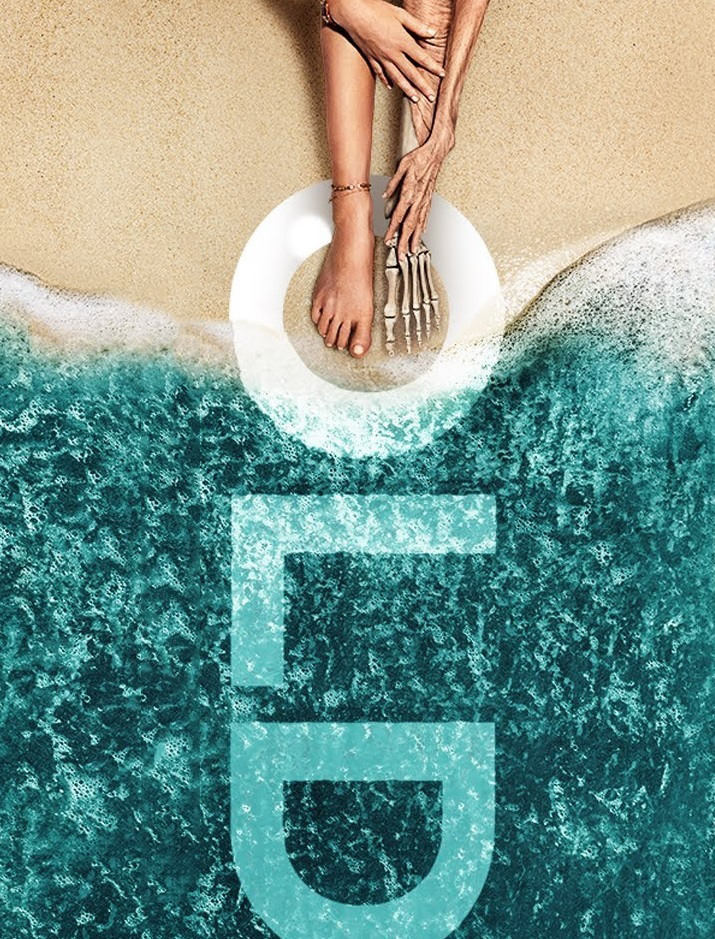 I went into this film with not much prior knowledge apart from knowing the director, one actor and the fact that it was set on a tropical island. This was the best way to do it for me personally as watching the trailer afterwards gave away a lot of key details. The screen was pretty busy and I had a good aisle seat. This film eases you in with marriage problems and a family on holiday but after going to the beach, everything falls apart and the story begins to mess with your perception of reality. I have only seen one M. Night Shyamalan film before and it was a long time ago. I knew his films usually had a thriller/horror element and were known for being mind-bending. The screen was semi-packed which gave me confidence in the film, especially as it had already been out for three weeks.

The film title and poster do not give much away other than the ageing element. When I went in I wondered how this would play into things, I imagined the characters being shipwrecked on the island and steadily growing old as we do normally. What did happen was very unexpected. It is hard to talk much about this film without giving away the big idea so I will be talking about the concept of the film and certain plot details.

The film focuses around a family with two young children. They are on holiday from the US but both parents are European from their accents. The trip is one least hurrah before they tell the kids they are divorcing and that the mother has an illness. They check in and are greeted with specially designed cocktails and charming staff. The hotel looks very luxurious and everything seems picture perfect. We meet a few other characters: families on holiday, all Americans so we can assume the Caribbean or somewhere off the US Coast. Nothing big happens until a guest has a seizure and everyone rushes to help. Trent, the youngest of our main family makes friends with another boy his age, Idlib whose uncle runs the resort.

The next day, the manager tells the family of an exclusive beach that is only available to his favourite guests. They are guided to a minibus where the family from the dining hall before have also boarded. They are taken to the beach by a familiar face (M. Night Shyamalan) and told to call if they want to be picked up or the bus will come at 5pm. The group walk through the rocks, armed with deck chairs and heavy picnic baskets and appear on a picturesque, quiet beach. They settle in but notice another man sitting on the sand in the distance.

Things begin to get unnerving when Trent finds a dead body in a shallow rock pool. The man tells the group he was with her and they connected because they both have conditions. While trying to sort out the body, another couple arrive, the woman who had the seizure and her husband. Someone tries to go back through the rocks but ends up blacked-out on the beach. They are trapped.

With all this going on, the parents initially miss their kids ageing up 5 years. The two 6 years, one from each family and Trent’s sister, Maddox who is 11 are all now biologically older. Then the mother of the doctor dies then her dog. Things keep getting weirder and weirder until they work out that they are ageing roughly a year every half an hour. The conditions and illnesses become more prevalent and create problems for the holidaymakers.

I will not give away the ending but it was not one you would expect and had a more logical yet disturbing explanation. There is also a happy ending for some characters so it is not totally doom and gloom.

I liked this film as it had a good concept that was not completely obvious but once it hits, there is little time to find a solution. The characters all had complexities but were easy enough to follow as the concept was enough to hold it together. I also think the casting was great for Trent and Maddox at different ages, especially Trent. I truly believed they were the same person. I related to the characters because I could not see a way out of the situation and any time spent on the problem was wasted periods of their lives.

The diversity was good, it is rare to have two European characters in such prominent roles. There were a few moments that were amped up for shock factor particularly how Crystal and her husband met their ends. Overall, an enjoyable film that makes you cherish the time you have rather than spending that time worrying or not making that change before it’s too late.