Brian who has never had a boyfriend or even the same man twice becomes attached to Justin and lets him into his life in ways he has never done before. He sleeps with him multiple times and even lets him stay with him for a few weeks. Brian sees part of himself in Justin after meeting his father. While Brian’s father does not know his is gay, he was emotionally abusive and told Brian that he never wanted children. When Justin is kicked out by his father and told he has a disgusting lifestyle, Brian knows that Justin should not be in that environment or he may turn out emotionally scarred like Brian. One of the reasons that Brian never forms romantic attachments is that he is scared of becoming too reliant on someone and have them leave. He lets Justin in as Justin loves him unconditionally which no other man apart from Michael has ever done. 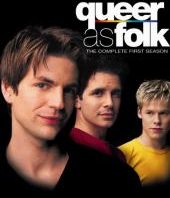 Yes it’s sex which for the time was ground-breaking but it also showed gay and lesbian people as multi-faceted with complex lives and relationships. The main characters were vastly different and all exhibit different traits and occasionally stereotypes. As the show was first broadcast over 20 years ago in the year 2000, attitudes towards LGBT people have changed but in the show, we see more discrimination and different words used than we have in today’s society. As well as the show being set in America, the world of Queer as Folk US is more gay-central and at times more anti-heterosexual than the UK version.

As a warning, the show contains a lot of adult content and nudity and I will be writing about that so please do not read if you are under 18 or do not want to read about more explicit content.

Series 1 – Introduction of the Characters and Analysis of Events

This is the first series of Queer as Folk and the storylines closely follow the British series but expand and add narrative arcs. The plot becomes completely original by the end of this series and we see the characters explore things beyond their British counterparts. In the first episode, Michael introduces us to his friends: Ted, Emmett and Brian. We also meet Justin, Melanie and Lindsay.

We learn that Michael is the self-appointed boy-next-door. He is kind and mild-mannered but passionate and loyal. We see a flair of temper after he discovers Brian’s Jeep was vandalised in his care. Michael does not get a lot of action but still attracts the odd one night stand. They do not always end well and we see that Michael is more comfortable in a monogamous relationship. This is demonstrated by his partnership with David in Series 1 and later with Ben. Michael is also not very ambitious and accepts his place as an Assistant Manager at The Big Q. He goes along with dating fellow co-worker Tracy to land a promotion after acknowledging that to get ahead he has to be seen with a woman. Michael follows his passion and becomes the owner of his own comic book store and even starts his own comic, Rage with Justin.

Emmett is the ‘queen’ of the group and the one who is most ‘obviously’ gay. He works at a fashion store on Liberty Avenue and dresses very colourfully with bright, outrageous clothes. Emmett has a very sweet nature that others sometimes take for granted. He talks often of his childhood in Hazelhurst, Mississippi and his Aunt Lula. Emmett also lives with Michael and continues to live in his apartment when Michael moves out to be with David. Emmett goes through a few jobs as a porn star, a domestic helper and eventually starts his own party planning business with Michael’s Uncle Vic.

Justin is artistic and romantic and wears his heart on his sleeve. He quickly learns how to be a gay man on Liberty Avenue and after his bashing, he becomes more mature and less dramatic. Justin is in high school and then goes to college to study art. He also illustrates Rage and works on the film in the art department in Hollywood. Justin moves out to live with Debbie and Vic and works at the Liberty Diner during high school and college.

Brian is cold-hearted and sleeps with many men. He cares deeply for Michael, Justin and the others but struggles to show his emotions for fear of not appearing in control or powerful. Brian loves expensive clothes and has a loft filled with designer furniture. He is often quick-witted and possessive over Michael. Brian is an ad executive for Vanguard. He makes partner but is then fired and starts his own company, Kinnetic.

Lindsay is sensible and mothering and she grew up with money. She is an art teacher at the university and goes on maternity leave for a year to raise Gus. She starts working at at art gallery in Series 2 and starts her own art once again. She has a deep friendship with Brian from their college days and always forgives him. She can be uptight sometimes but knows how to let loose.

Melanie is a lawyer who helps the group in many cases. She is daring and adventurous and more stereotypically ‘butch’ with her hobbies and strong personality but she can be soft and emotional too. She dislikes Brian at first and blames him for trying to come between herself and Lindsay. She also has a friendship with Ted as they both enjoy the arts.

Debbie is Michael’s mother and is very supportive of her son and his friends. She works at the Liberty Diner and never shies away from making suggestive comments. She is passionate in her love for Michael and her brother, Vic. She is very caring and is the unofficial mother of the boys, often lending an ear to Brian, taking in Justin and sending food to anyone who needs it. Debbie can sometimes be too overbearing and does not do well on her own.

Vic is a character we often see with Debbie whether at their house or at the local bar, Woody’s. He has HIV and is slowly recovering from a recent string of illnesses in Series 1. He can be cheeky just like Debbie and likes to party. He is an amazing chef and becomes partners with Emmett in his party planning business.

Michael has always held a candle for Brian since they met at age 14. In the first series, Michael still holds these feelings and relishes any time spent together and any friendly kisses the two share. When he dates David, his feelings for Brian and Brian himself come between them. Michael initially rejects David’s offer to move in together as he thinks he will never see his friends or go out clubbing again but after Brian’s harsh words at Michael’s birthday, Michael moves in with David as he thinks he has broken ties with Brian. It is almost in retaliation to Brian who never approved of Michael having a steady relationship and wants to keep him as a child. Debbie instantly knows why Brian outed Michael to Tracy and she thanks him later for finally letting him go. Brian knows he did the right thing for Michael but he still takes it badly. Debbie notes that Brian could not push him away gently and Brian agrees that Michael would have followed him around forever. Michael eventually forgives Brian like he always does and Brian once again gets between himself and David.

Emmett tries to ‘see the light’ in this series which appears very out of character for him. He does so in a reaction to a HIV scare and feels he has to honour a promise he made to God. It is the relief of being diagnosed negative that propels Emmett to try and become straight to never face that scare again. It is an understandable response to the situation but Emmett realises that he cannot live in fear and deny his true identity. Despite the risks of infection out there, he does not want to become someone he is not.

Ted harbours a secret crush on Michael that he feels relates him to Michael because of Michael’s love for Brian. Ted thinks of them as similar because Michael also doubts himself and whether he is worthy of love but when Ted confronts Michael, he does not get the answer he wanted. Ted uses his secret love for Michael as an excuse to never find a boyfriend but eventually realises that having an unrequited crush is not healthy and he tries to find a real relationship.

Brian who has never had a boyfriend or even the same man twice becomes attached to Justin and lets him into his life in ways he has never done before. He sleeps with him multiple times and even lets him stay with him for a few weeks. Brian sees part of himself in Justin after meeting his father. While Brian’s father does not know his is gay, he was emotionally abusive and told Brian that he never wanted children. When Justin is kicked out by his father and told he has a disgusting lifestyle, Brian knows that Justin should not be in that environment or he may turn out emotionally scarred like himself. One of the reasons that Brian never forms romantic attachments is that he is scared of becoming too reliant on someone and then they leave. He lets Justin in as Justin loves him unconditionally which no other man apart from Michael has ever done.

Melanie has an affair with another woman because Lindsay pulls away from her when she decides to take a year off. There was a balance between them but now Melanie hardly sees Gus and works all day whereas Lindsay gets to be with him all the time. Melanie wants to talk about everything as she did growing up and Lindsay wants to pretend everything is alright and not talk about their issues as she did growing up. Both are a product of their upbringing. Brian helps them to work things out by giving up his parental rights enabling Melanie to become a second parent.

My next post will be covering Series 2 and the key relationships between the characters.